What are the preparation methods of ultra pure water equipment in the electronics industry?
- 2019-07-31-

According to the distillation vessel, it can be divided into glass, quartz, and metal materials such as copper, stainless steel, and platinum. According to the number of distillations, it can be divided into one, two, and multiple distillation methods. In addition, in order to remove some special impurities, Some special measures need to be taken. For example, participating in some potassium permanganate in advance can remove easy oxides; participating in a little phosphoric acid can remove ferric iron; participating in a little non-volatile acid can produce ammonia-free water, etc. Distilled water can meet the general analysis laboratory The demand for water. Because it is difficult to remove the dissolution of carbon dioxide, the resistivity of water is very low, not reaching the MΩ level. It cannot meet the needs of many new technologies.

There are two main preparation methods:

B. Mixed bed type (2-5 grades in series), mixed bed deionization effect is good, but regeneration is not convenient.

The ion exchange method can obtain more than ten MΩ of deionized water. However, organic matter cannot be removed, and the TOC and COD values are often higher than the raw water. This is because the resin is not good, or the pre-treatment of the resin is not thorough, and the content of the resin is low. Polymers, monomers, additives, etc. have not been removed, or the resin is unstable, and synthetic products are released from time to time. All this will be expressed in terms of TOC or COD indicators. For example, when the COD value of tap water is 2mg / L The COD value of deionized water obtained after deionization treatment is often between 5-10mg / L. Of course, good results will be obtained when the resin is used, otherwise ultra-pure water cannot be prepared.

It was produced in 1950 [4]. Because of its low energy consumption, it is often used as a pre-treatment step of the ion exchange method. Under the action of an external DC electric field, it uses an anion-cation exchange membrane to selectively allow anions and cations to pass through, making a local Ions migrate to another local water through the ion exchange membrane, so that one local water is purified and the other local water is concentrated. This is the principle of electrodialysis. Electrodialysis is one of the commonly used desalination techniques. The purity of the produced water can be Meet the needs of industrial water. For example, using raw water with a resistivity of 1.6KΩ · cm (25 ° C) can produce 1.03MΩ · cm (25 ° C) of produced water. In other words, the total hardness of the raw water is 77mg / The total hardness of the produced water at L is ∽10mg / L.

4.Reverse osmosis method, currently it is a widely used desalination technology. Although the reverse osmosis membrane has been in 1977, its scope of consumption and general use for desalination are things in recent years. Removes inorganic salts, organic matter (molecular weight> 500), bacteria, heat source, virus, suspended matter (particle size> 0.1μm), etc. The resistivity of produced water can be increased by nearly 10 times compared to the resistivity of raw water. 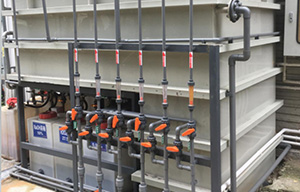