Suspended solid pollutants are commonly found in surface water and wastewater sources, and their particle diameters are often greater than 1 micron. Such impurities can be completely deposited when the water flow is in an unstirred state, and it can be easily filtered out by the fine sand filter and the multi-media filter provided by the reverse osmosis equipment. When a flocculant or agglomeration is set in the pretreatment system of the reverse osmosis equipment, In the dosing process of the agent, such impurities can also be adsorbed by the alum flower formed by the flocculant, and then filtered out by the multi-media filter fine or the sand filter.

Colloidal pollutants are also commonly found in surface water and wastewater sources, and their particle diameters are often less than 1 micron. Such impurities will not settle freely even when they are not agitated by the water flow, and will always remain in suspension. Such impurities may be monomer compounds composed of organic or inorganic components, or composite compounds composed of multiple types of compounds. Such as silicic acid compounds, iron-aluminum oxides, sulfides, tannins, humic substances and so on. 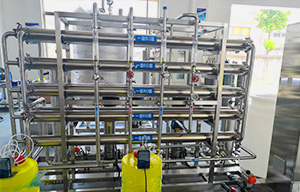 下一条: What should be paid attention to when cleaning hospital sewage treatment equipment